I’ve noticed lately that the media are throwing around the word “rhetoric” a lot. They’re using it like it means “an opinion or position taken by someone when discussing an issue.” Many treat it like it’s truth or a version of the truth based on fact. Merriam-Webster defines rhetoric as “language that is intended to influence people and that may not be honest or reasonable.” Rhetoric is opinions that do not have to be based on fact at all.

One thing about politicians: the vast majority are not honest or reasonable. Many pander to the lowest common denominator. They do not seek to raise us up and make us better people. There’s no adherence to a “harm none” philosophy, much less a desire to improve the lives of those who most need help. They’re leaders who lack the courage to lead. They perpetuate hatred, racism, and xenophobia. The debate about LGBT issues moved out of the spotlight after the anti-gay laws enacted in Mississippi and North Carolina fell victim to national ADD (Attention Deficit Disorder.) The shootings at The Pulse in Orlando brought it back into the spotlight—somewhat.

The massacre in Orlando brought many out to express sympathy, including those who block legislation that would protect the LGBT persons or introduce/sponsor legislation that directly or indirectly targets LGBT persons. Though the news has carried headlines about pastors and others who basically said that gays had is coming, much of the news focused on people—activists and mourners—who had messages of unity and love. Perhaps they aren’t Pagan, but those are at the heart of our philosophy. Particularly, I was struck by those dressed as angels who blocked protesters from the cult The Westboro Baptist Church from disrupting the funerals of the Pulse victims. Blessed Be.

The truth of the matter is that hate crimes, related to terrorism or not, will continue to happen because of the insidious nature of anti-gay prejudice that is ingrained in people from a young age. It starts with cultures or religions—in the US—that preach against it, cements when we tolerate anti-gay speech (even something as seemingly innocuous as letting kids say, “that’s gay” when speaking of something undesirable), and it proliferates in the hearts of those who internalize that hate.

That hate has to be directed somewhere. Is it ironic that some of the most strident anti-LGBT advocates are themselves found to have secret gay relationships or affairs? How about the fact that Mateen, the Orlando mass-murderer, repeatedly tried to pick up men? If these people had been taught to love and accept themselves, they wouldn’t be running around preaching hate, legislating anti-LGBT bills, or killing gays because they’re terrified of being who they really are.

At some point, we need to recognize the harm of rhetoric that perpetuates hate—hatred of self and of others—because that’s the real root of all this evil. 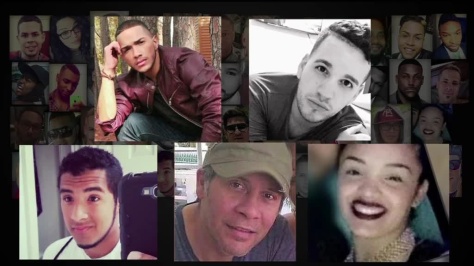 One thought on “The LGBT Massacre in Orlando and Political Rhetoric”