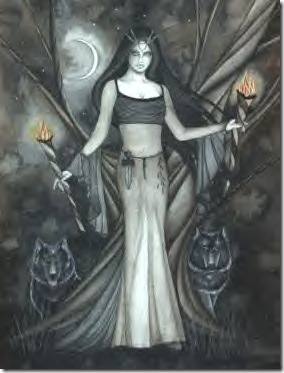 Years ago when I was 19, I used to go to this woman who claimed she was a channel.

A channel, being someone that the dead can speak through.

She was the mother of my dearest friend, and this being their family secret, you can imagine my excitement when they first decided to ‘tell’ me about it.

As I said, I was 19 and I had been pursuing subjects concerning the Occult and Paranormal for many years prior. Only I walked that path alone since where I grew up, such interests were forbidden.

I felt alone, sometimes lost, but never on the verge of giving up. So naturally, when I discovered that this family was on the same level as me…well, it was amazing to say the least.

On the first night with that Channel, things that I never told a soul…my own personal experiences, my private dreams, visions, everything –came to light by mouth of the first spirit that entered. I was ecstatic and while not all things were what they seemed to be with the woman channeling, there were many experiences that I just couldn’t shake or forget.

One being the black dog and the crossroads.

It was 2 am in the morning and we were sitting in the Channel’s living room watching movies. Whatever came ‘through’ her, was often known to lie or muck about. In fact, by this time, we had realized that she probably preferred the more troubled or negative beings than anything else. They became her crutch to do all sorts of harm to people, among other things. If it wasn’t for my friendship with the daughter, who was nothing like the mother, I probably would have stopped going there despite the few times a normal and impressive entity did come through.

So when this so- called spirit came forth crying (claiming she was my daughter from a past life).

I just sat, smiled politely, nodded, and watched the TV in the corner of my eye– hoping it would soon be over.

That is until the crying became hysterical and this ‘daughter’ of mine had a warning for me.  She claimed when I drove home that night, I would see a large black dog lying in the road. I would get out of the car to help the dog but it would jump up and rip my throat out. She said the dog was sent by evil to destroy me.

I admit, she had me interested until the whole ‘Evil plotting my destruction’ scenario. That was a common thing with the Channel. I don’t know, maybe she was made crazy by all the ‘channeling’? But she was always on this kick—or those she channeled was—that we were evil in our past lives (except for her) and this life was our punishment– and Evil from all our past lives was out to make us suffer, and blah, blah, blah.

This was an all day, everyday- thing anymore. And to be honest, I didn’t believe that ;’Evil’ had that kind of power. I am a firm believer that no one can do anything to you unless you allow it. Not like that anyway.

So, looking at my friend, rolling my eyes, I bid my good-nights and hid out to drive home. I live 25 minutes away in a more rural area than these people do. It’s after 3 am when I near my house, having to turn onto the road that leads me to it.

It’s a crossroad and I need to go left in order to drive 10 more minutes to get home. I turn left, its the dead of night, no cars, no traffic and certainly no people. No sooner did my wheels turn, I slammed on my breaks.

There is in plain sight, lying in the road, a HUGE black dog. Abnormally big, in fact. I mean the only way I can go past it, is to drive over it.

My eyes were wide open, my mouth probably dropped. Now being me, always trying to dissect any situation, I start looking around. There is a large street light plus my high beams. The reason for the light was because a trailer sat way back off the road and because the wife worked the late shift, the husband installed a light at the end of their driveway for her.

But they didn’t have a black dog. In fact, I didn’t know anyone in this area that had a dog this big.

Was the dog hit?

I didn’t see any blood. I even honked my horn thinking maybe the dang thing was asleep, although I have never seen a dog sleep in the middle of a normally busy road before. And the only reason this road wasn’t busy is because its so late.

I start thinking about the spirit. And yes, I even started to test my fate by getting out of the car to see if the animal ripped my throat out lol. But then reality hit me. What if some bad people were hiding in the fields or a ditch? What if they put the dog there hoping some woman got out of  her car so they could rob her, slit her throat,  and what if….

Hey, while I didn’t live in a crime inflicted area, ya never know.

So driving real slow up to the dog, I keep trying to get ‘it’ to move but nothing. I even turn my car different directions so that my high beams are blaring into the fields…that way if some bad person was hiding….

Deciding it was too dark and too weird (especially since this crying daughter of mine had warned me) I drive around the dog—literally having to drive onto the edge of the road, into the field a little, and hid home.

But I didn’t get very far before curiosity nailed me again. I didn’t get but around the corner before I turned around and went back. Now, if I were where the dog was, he could have seen my bumper—that’s how short of a distance I went. But when I turned around, the dog… was GONE.

I did the same thing I did before. I spun my car around in all directions trying to see if the black canine was running through the fields, but there was nothing. And mind you, this thing was so big that I would have seen it.

I never knew what the hell it meant. And sometimes I am mad that I didn’t risk my throat, get out, and see for myself.

Then a few years ago, I was researching some Pagan lore and stumbled upon Hekate. I read where she was known to frequent crossroads and that often, black dogs appeared out of nowhere or were seen by her.

Now while I doubt Hekate came to rip my throat out…I wondered if this had something to do with it? What was she trying to tell me? What did the entire situation mean? I guess I will never know but that doesn’t mean I’ll ever forget it.

2 thoughts on “The Channel, the Black Dog, & the Crossroads”