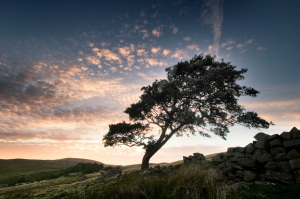 Alder, Fearn, is the tree of BRAN. Bran is one of the elder, father-figure gods in the Celtic tradition, in the sense of Elder as a teacher and wise one rather than just as a progenitor. He fought for his sister who was ill treated by her Gaelic-Irish husband. Bran was a giant, so strong he was able to pull all the British fleet, all together, across the Irish sea to go to battle for Branwen.
Bran and his sister, Branwen, share the name of Bran, meaning “crow” or “raven” – it’s modern equivalent is Brian. Branwen’s name, with the addition of “wen”, means “white crow/raven”. She carries the white while her brother, Bran carries the black. This is worth remembering in terms of the Three Cups –
• the red cup of lordship,
• the white cup of fostering and 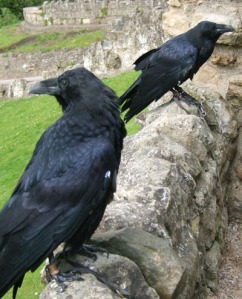 • the black cup of forgetfulness.

I’ll talk more about the 3 Cups another time.

BRANWEN carries the colour of the cup of FOSTERING. To foster means to promote, further, advance, cultivate and encourage as well as to look after, care for, bring up and nurture which may be what we usually think of when we use the word.

BRAN himself is a wise one. When he died he asked that his head be cut off and carried with his followers wherever they went so that he could speak to them, and he did just that. Whenever they had a problem they would consult with Bran’s head. Finally, the head was buried under the mound where the White Tower now stands in the Tower of London and it is said that as long as it is there no power will ever be able again to invade Britain. 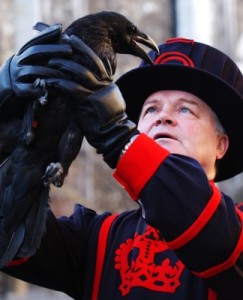 Nowadays, the grassy slopes of the White Tower is where the ravens of the Tower of London are fed. The ravens, too, are part of the enchantment which keeps Britain from being invaded. There are always ravens at the Tower and they are jealously guarded and nurtured to encourage them to stay.

Ravens themselves are amazing birds. They are very long-lived, as long if not longer than humans, they also mate for life. All the corvid family – ravens, crow, jays, jackdaws – are extremely intelligent and can count at least up to ten … as birdwatchers will crossly tell you! If you go to watch birds using a hide it’s best if two of you go, then one of you leaves the hide and goes away. Most birds then believe there is no-one in the hide … but not corvids. If you want to watch them from a hide you have to persuade 10 of your friends to come to the hide with you, often at some ungodly hour just before dawn … this usually costs you a lot of beer down the pub first *g*.

So you have Bran, the wise elder god who also protects the :and – in the manner of the king guarding Sovereignty and the personality guarding the soul. And you have the ancient and wise raven, who carries the energies of both fostering and forgetfulness.

What is this FORGETFULNESS? What do you forget?

It is about forgetting the little self, the personal wants and needs and focusing on those of the whole, the Land, Sovereignty. Of course the soul has these in mind all the time, its job is to work with the group – your totem-brothers – towards the part of the plan you promised to help this incarnation. This is wisdom.

Wisdom incurs know of the plan, of its existence and knowing your own part in its continuation. It also asks that you do your best to follow-up on your promise and do your bit. By forgetting your little personal self and focusing on nurturing the Plan you bring to yourself the black and white energies of the two cups … and when they are within you then you are better equipped to enable others. So the wheel goes around.

Although a poor firewood alder gives the best charcoal. It was used in Ireland to make milk-pails and called comet lachta, “guarding the milk”. It was also used for whistle-pipe-making in the Pyrenees. The boys of Cerdana, in the Pyrenees, had a charm for making whistle-pipes …

“Berng, Berng, come out of your skin, And I will make you whistle sweetly”

Berng, or Verng in the allied Majorcan language, is Bran again.

Alder is also celebrated for yielding 3 fine dyes – red from the bark, green from the flowers and brown from the twigs, symbolising fire, water and earth. Alder is also called ro-eim in an ancient gloss, meaning “that which reddens the face”. The red-faced kings of the Welsh Triads have used alder for this purpose, having a strong connection with the elder king, Bran.

Here’s a few recommended reads for young pagans. These are all books I’ve read, and that have pagan themes, suitable for YA readers and good for kids who exploring paganism. These stories offer characters to identify with, and good pagan representation, or draw on pagan myths. Please do add more suggestions!

The Wierdstone of Brisingamen and The Moon of Gomrath, Elidor – Alan Garner… much mythical underpinning to these, good stories.

The Owl Service – Alan Garner – draws on the tale of Blodeuwedd and is an excellent way into the mabinogian.

The Way of Wyrd – Brian Baters – perhaps for slightly older kids, this is an excellent portrayal of things Heathen.

The Vision of Stephen – Lolah Burford. It was a while ago that I read this, but I recall that karma/reincarnation seemed to play a part, and it’s a rather haunting story.

Ice is Coming – Patricia Wrightson – another one I loved as a child. Much Australian mythology at play in this one.

I’d also recommend any of the Terry Pratchett witches books. I think Pratchett is one of the best authors for depicting witchcraft and magic. He does it in a fantasy setting, but with remarkable insight.