As most of my readers will know, I have a fascination for odd and obscure historical facts that are hidden away in the millions of sources that outstrip and confound the confines of the Internet – it’s finding them that presents the stimulation and the challenge. If we merely rely on the regurgitated information of contemporary paganism not only does our mind become stagnant, but for those who follow the Craft of the witch, so do our magical abilities.

In traditional British Old Craft, ours is a nameless god – a composite of all the images from the ancient world that The Orphic Hymns hailed as:

I call strong Pan, the substance of the whole,

Immortal fire; for all the world is thine,

And all are parts of thee, O pow’r divine.

Which probably explains why in Coven of the Scales schooling, Meriem Clay-Egerton always

saw Pan as the Horned God … and the Horned God as Pan. This was a traditional British Old Craft coven that honoured Aegocerus the ‘goat-horned’ – an epithet of the Greek Pan – not

Cernunnos, the stag-horned deity the Celts had brought with them from northern Europe. It should also be understood that although Coven of the Scales held firmly to the philosophy and

opinion that all faiths were One and all Paths led to the same Goal, it did not advocate what is now referred to as ‘eclectic paganism’. So how on earth could this ancient, pre-Olympian

Greek deity find his way into the beliefs of traditional witchcraft in Britain?

Pan: Dark Lord of the Forest and Horned God of the Witches is an exploration of how an Old European deity who, even in Classical Greece defied their ethnic love of order and refused to be pigeon-holed, categorized and compartmentalized to fit into the Olympian pantheon.  This ancient libertine was too scruffy and unkempt to be included among these exalted creatures – but then again, he was far too powerful to be ignored.  Needless to say, Pan possessed all the conventional abilities of the Olympian gods such as super-human strength and longevity, shape-shifting, stamina and resistance to injury. He also had some mystical powers, especially those associated with music and dance, and its magical potency; not to mention a very wily mind, a raucous sense of humour and a shout or scream that instilled terror in the hearer.

Yet Pan’s image retained its immense power when Greek myth passed into Christian myth, with Pan’s cloven-footed appearance providing a perfect concept for the Devil in the eyes of the new, evolving priesthood. In ancient and medieval times the common people were taught by being exposed to holy images, and fear would not have been instilled in them by being shown pictures of the Olympian ‘beautiful people’; particularly during the medieval period, when the Devil was conceived as having horns and a goat’s hindquarters. Pan’s activities are those of a giver of fertility; hence he is represented as vigorous and lustful – the latter being one of the Devil’s bestial characteristics and a condition abhorrent to the Christian clergy.

Nevertheless, once an image has become firmly engrained in the cultural unconsciousness it is extremely difficult to dislodge. Joseph L. Henderson of the Jung Foundation described it as an area of historical memory that lies between the collective unconscious and the manifest culture pattern; having some kind of identity ‘arising from the archetypes of the collective unconscious which, on one hand, assists in the formation of myth and ritual, and on the other, promotes the process of development in individual human beings…’ These mythological motifs, or primordial thoughts, lie dormant until some dream, vision or epiphany brings them to the fore – and often with conflicting emotions between faith and instinct.

Because behind every myth, fairy tale and legend – hidden within the art, song and structures of those ancient times – is an encoded layer of wisdom, science and truth passed down through countless generations.  Between 1890 and 1926 there was an ‘astonishing resurgence of interest in the Pan motif’. He appears in poetry, in novels and children’s books, and as the eponymous ‘Piper at the Gates of Dawn’ in Kenneth Grahame’s The Wind in the Willows (1908), providing the reader with one of the most evocative images of the Great God Pan ever written:

…saw the backward sweep of the curved horns, gleaming in the growing daylight; saw the stern, hooked nose between the kindly eyes that were looking down on them humorously, while the bearded mouth broke into a half-smile at the corners; saw the ripping muscles on the arm that lay across the broad chest, the long supple hand still holding the panpipes… saw the splendid curves of the shaggy limbs… Weathering the Storm is a new anthology from Moon Books, and it is free to download from most book selling platforms.

Written in three parts, psychological, spiritual and practical, Weathering the Storm is an anthology offering support to those of us who are isolated or vulnerable.

There are many contributing authors from different backgrounds, so there’s likely something for everyone in here. Covering areas from loneliness and anxiety, self-care and gardening, to cooking and crystals, Weathering the Storm is a book designed to help everyone through uneasy, unprecedented times.

Here are some new Pagan books coming out in July 2018

The Hidden Worlds by Sandra Ingerman and Katherine Wood. Shamanic YA fiction.

Were those people in Isaiah’s dream the same people from school? Popular soccer star Magda? George, who he’d never heard speak because he always left classes for special services help? Angry Rose, the Chinese girl who was always in trouble for fighting? And why were there dead birds and fish everywhere? When the four encounter one another the next day by the same pond from the dream, they realize they’ve shared a dream and there really are dead birds and fish covering the ground! This leads to real-life adventures and more dreams as they discover a toxic waste plant disposing of poisons illegally. Not friends in the beginning, romance blossoms as they work together with their Power Animals to close down the plant.

There are a lot of things in the universe that we don’t understand. When something is meant to happen, it will whether you cast a spell or not. But you can help it on its way by guiding and encouraging it and maybe even tweaking events a little too. A spell can be worked in many ways, from a simple pointing of the finger to a complicated ritual involving lots of herbs and crystals and, of course, any variation in between. What will happen for sure is the boost of confidence and happy buzz you will receive as you cast the spell, as well as the positive vibe you get from putting something into action.
Kitchen Witchcraft: Spells & Charms is a the first in a series of books which delves into the world of the Kitchen Witch. Each book breaks down the whys and wherefores of the subject and includes practical guides and exercises. Other titles include Garden Magic, Altars & Rituals and The Elements. 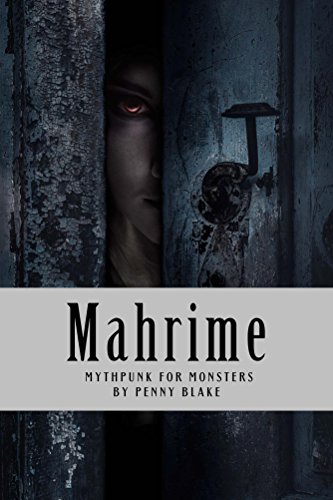 Mahrime, by Penny Blake.A selection of mythpunk stories, prose and poems where monsters take the main stage, identity and power are deeply questioned and love takes some very unexpected forms.

To get involved with the Pagan Federation Disabilities Team – which runs many online events – visit https://www.facebook.com/groups/PFDisabilitiesSupport/