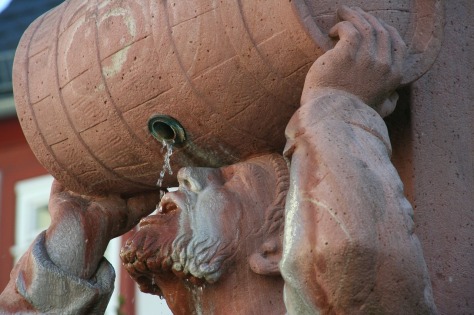 Dionysus is a popular god, for obvious reasons. At first glance, his rites look an awful lot like wild parties. And it’s true, one of the things he’s really good at is breaking down barriers and societal conventions. But the purpose behind all that mayhem isn’t simply to have a good time. There’s meant to be spiritual growth involved, believe it or not.

Most people know Dionysus as the god of wine. He’s associated specifically with this beverage, which people have brewed for millennia, and his death is celebrated at the time of the grape harvest. Yes, he’s one of those so-called dying-and-reborn gods, though I think it’s more accurate to say he descends to the Underworld and then returns later on.

So why wine? The Minoans also brewed beer (the goddess Rhea is associated with grain) and mead (honey is the purview of the Melissae, the ancestral bee-goddesses). But Rhea and the Melissae link to grain and honey, not necessarily to the brewed beverages. And that’s a clue to Dionysus’ secrets: All the brewed drinks are ultimately his.

I’ve been brewing wine for more than 20 years, and the process never ceases to amaze me. Can you imagine what it must have felt like, tens of thousands of years ago, to be that first person whose bowl of juicy grapes or cup of barley gruel sat out a little too long and, instead of going bad, turned into a tasty fizzy drink that made you feel lightheaded? A drink that made it that much easier to reach a state of ecstasy in ritual. At a Pagan gathering, I once had a jug of apple cider turn into “apple champagne” all by itself, with no intervention from me. That was some awesome natural magic.

Fermentation changes one substance into another. It’s a kind of transformation, from an ordinary material (grapes, grain, honey) into a unique and special one. In a sense, it’s the earliest type of alchemy.

It’s transformation that Dionysus is all about: changing us from our ordinary selves into something greater, more expanded, more luminous. Pushing us outside our preconceived notions, outside society’s set of rules for how we should think, feel, and experience the universe. Fermenting us from grapes into wine.

May you become the very finest wine of all.

In the name of the bee,

And of the butterfly,

And of the breeze, amen.