Highly recommended. Australian Druidry is a great introduction to modern Druidry in Australia. It describes the author’s journey to develop a Druidry for her needs. It shows all of us how to deepen into the wheel of the year, looking for cues in natural shifts rather than our calendars. As part of Moon Books’ Pagan Portals series, it is clearly and succinctly written.

For author Julie Brett, “modern Druidry is a path of nature-based spirituality being walked by many people over the world today. It centres on an understanding that is the ‘wisdom of the trees’ as the messengers of the natural world that can help us find guidance in our lives for peace, learning and personal development”. These principles can be taken to every part of the world, including the huge diversity of Australia itself, and customised to work any specific landscape.

Druidry is also a spirituality of recognition…

Reblogged  with the author’s blessing from https://siriusrising777.wixsite.com/ 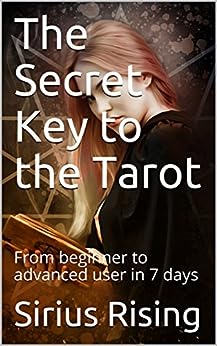 Occult Times interviews the author Sirius Rising about his latest book, “The Secret Key to the Tarot”.

Occult Times: This is the second book you’ve written about Tarot.

Occult Times: Why did you feel the need to write another Tarot book.

Sirius Rising: The Tarot and Sex Magick is really meant for the advanced Tarot and Magick student. The Sex Magick techniques in the book are based on the teachings of Aleister Crowley.

I never recommend that a student begins his or her journey into Magick with Crowley. He’s really a place to end, rather than a starting point. It’s true that I began my spiritual path with the inspiration of Crowley, but I wouldn’t advise that for everyone.

Also, the Tarot and Sex Magick book also looks into curses. That is not a popular subject these days. There is also a dark side to the Tarot not much understood by Tarot readers today.

Occult Times: Would you say that the rituals in the book, namely sex magick and curses are Black Magick?

Sirius Rising: Well, only in the sense that any rituals designed to achieve material gains are a form of black magick. Personally, I see little distinction between White and Black Magick. They are both about the subjugation of the magician’s Will. When the Christian, Muslim or Jew worships God and puts their lives in His hands, then they have subjugated their Will to God. That is what White Magick really is, and clearly a huge percentage of the world practices White Magick.

There is also a lesser known Middle Way Magick, which is known as Buddhism. But that’s a story to be told in another book.

Occult Times: So, would you say that your new book “The Secret Key to the Tarot” is an introduction to Tarot or Magick?

Sirius Rising: Well, both really. There have, of course, been many excellent introductions to the Tarot written over the past 100 years. Crowley’s Book of Thoth is a masterpiece in that it explains Tarot’s profound link with the Ancient Mystery Traditions  such as the Qabalah. Apart from “Magick without Tears”, Crowley never wrote in a simple manner as he assumed he was writing for his disciples who were already thinking in harmony with his philosophy.

My book looks at the Tarot as an initiation ritual that many call the Path of the Fool. It’s an initiation that we all take in our own lives. They are rites of passage in life, which are the way markers and sign posts. Unfortunately, most people get hopelessly lost on the journey of life. This ends in confusion, resentment and ultimately despair. The Tarot is the perfect spiritual road map. I have little doubt, as Crowley did, that Tarot was carefully formulated in Ancient Egypt by the priest class as a gift to their fellow human beings.

Occult Times: Can you sum up the Path of the Fool?

Sirius Rising: The first half of the new book examines the Path or journey that all of us take. It consists of an outbound and an inbound journey. The Path of the Fool is the Major Arcana. The first 11 cards from the Fool to the Wheel of Fortune describe the outward journey. This is really the descent of the young and seeking soul from her blissful state of rest in the Great Mother’s womb into the chaos and chance of the material world. If you like, it’s the same descent from Kether to Malkuth in the Tree of Life.

The next 11 Major Arcana describe the inward journey back to the beginning point of the next life. All of us take our experience from this life and feed it back into our collective unconscious state ready for the next reincarnation. But as I said, the journey can be a lot less confusing with a tool such the Tarot to guide you.

Occult Times: You describe the book as an introduction to Tarot. Does that include how to use traditional spreads such as the Celtic Cross?

Sirius Rising: Yes, most certainly. After the card descriptions and how they relate to the Path of the Fool, I examine three different readings from real life by using three different spread techniques. When I say from beginner to advanced user, I mean that not only will the student be able to read the cards for themselves or for a client, but they will be approaching the readings from a magical or occult perspective.

Occult Times: What is your next book about?

Sirius Rising: I’m working on a book that shows the Path of the Fool from a Buddhist point of view. Again, with Tarot being used as a tool to illuminate the Buddhist teachings. This is what I referred to as the Middle Path of Magick.

Occult Times: I look forward to interviewing you about that book.

You can find The Secret Key to the Tarot here – https://www.amazon.co.uk/Secret-Key-Tarot-beginner-advanced-ebook/dp/B07BPCZ6YQ/ref=tmm_kin_swatch_0?_encoding=UTF8&qid=&sr=

Well from opening the first page and  reading the first chapter, I was hooked,.  You are drawn to Lizzie  whether you like it or not,  with her sweet nature and using her witchy ways in a way that I can really relate to.  From the start with the way  Lizzie is described I picked up that she was a witch, despite the title of the book.  It’s wonderfully written and takes you on a journey with Lizzie as a single parent, and her family’s ups and downs , which most people will have in real life… its as though you  can see yourself there watching.  It did jump about a bit in places  but i just couldn’t put it down…  well  worth a read and a  place on any bookshelf.

Here’s the synopsis for The Naked Witch, by Wendy Steele,

Lizzie Martin lives in Romford with her fourteen year old daughter, Rowan. She enjoys her job as a receptionist and typist at an old established, family run company. She clothes herself from charity shops in vibrant, joyful colours with matching headbands she makes herself. Colour is Lizzie’s armour and she uses it to hold at bay the emotional angst of her ex-husband, Josh, whose girlfriend is barely out of her teens, her mother who has the sensitivity of a crocodile, and the big bad world from which she tries to protect her daughter.

But today Edward Brown – her new boss – has asked Lizzie to ‘bare all’, and become more corporate. For Lizzie, swapping paisley for pin stripe is like asking a parrot to wear pea hen.

Meanwhile, as Edward Brown retakes his position as head of the law firm, Lizzie has to choose between her job and her integrity, cope with an unexpected stay in hospital, continue seeking the truth about her father’s death and juggle two new men in her life.

There is hope though.

At the bottom of the garden is a little wooden shed that Lizzie calls Sanctuary. Within its warm and welcoming walls, Lizzie surrounds herself with magic…

To get involved with the Pagan Federation Disabilities Team – which runs many online events – visit https://www.facebook.com/groups/PFDisabilitiesSupport/

The Spring Equinox is a time of balance and enlightenment, literally and figuratively. The dark nights have been receding and the light days have been growing in length which has led in turn to the growth and greening of the plants and trees.

Many crystals and stones, like the plants around us, thrive on the increased light and fertile energies that surround us in Spring.

With its golden yellow hue Citrine epitomises the warm glow of the ever increasing Spring sunshine to which the plants and flowers lovingly respond. Citrine has the optimistic energy of Spring and all the potential it promises. It has the bright energy of golden daffodils which cannot fail to cheer us up even when the Spring showers are pouring down. If you are looking to bring light, brightness and joy into your life Citrine is a charming choice that will inspire and illuminate.

Rachel Patterson’s Witchcraft into the Wilds, reviewed by Cosmic Dancer

Yet another fabulous book by Rachel, this really takes you back to working with nature, very down to earth and showing you just how easy it is. You don’t need to buy fancy things, as mother nature provides these things. I loved the journal prompt too, documenting what you do is a brilliant way to look back and advance you work if you’re new to this path. Lots of very practical advice, these books just get better and better.