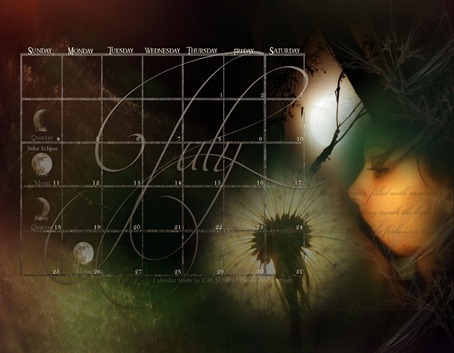 Above is the preview for the new Desktop Wallpaper for July 2010.

Inspiration: When people think of summertime, they often imagine sunsets, oceans, or lakes of blue. I don’t. I think of moonlit summer nights, starry skies, fireflies, hazy dreams, wishes, lovers secretly meeting within the shadows, and all sorts of magical things. That’s what inspired this wallpaper.  If you like it, then please share it with all of your friends. And if you really like it, keep checking back because I think I’m going to make this a Free Wallpaper without the Calendar part just so people can use it whenever.

Feel free to add your own holidays and such, but when sharing, please don’t change anything on the wallpaper.

This wallpaper has the moon dates but NO holidays since everyone lives in a different place, celebrating different things.

There is a solar eclipse this month, though, so keep an eye out for that.

(If you need a different size, then just leave me a comment below and tell me what size you want. I will be happy to make it for you, and load it up to my Photobucket Album.)

ENJOY!!!! And again, please share with all of your friends!

Catch her and those who haunt her grave at:

I release the sadness and loneliness of the past

And I consciously take action to heal my heart

so that love in all its forms may enter into my life.

I ask for your guidance in this Goddess/God/Spirit

Lead me to the people who will cherish me and easily share their affection.

I’ve known for a long time that man would be the cause of his own downfall, destroying himself quicker than anything else, often the catalyst for bigger things to come.

The BP oil spill is one of those things.

Man has slit one of Mother Earth’s carotid arteries, and she’s been hemorrhaging for70 days and counting.

What amazes me more is that those who want to try and help with either cleaning up what animals they find, or try to clear away what bits of sludge that washes up on the shores, ‘those on high’ tell them not to.

Why stop those who want to HELP? Does anyone smell another greed-driven conspiracy?

I’m sure most of us know that ‘greed’ plays factor in this. I’ve never been a fan of politics. It’s a liar’s game. Once the greed and lies override one’s common sense and integrity, you know the human race is done for. Anyone in their right mind would employ all the help they could get in getting our shorelines cared for. Just give folks a bit of training in how to handle and clean up oil-slicked animals. I’m sure there are many willing to volunteer their time because they have a heart and expect nothing in return.

People’s livelihoods are at stake.

And still, those higher-ups expect them to just sit around and wait.

That’s how long this spill has been going. It feels like ‘they’ aren’t in a big rush to do anything about it. If folks start resorting to performing vigilante acts of heroism, I wouldn’t be surprised, and would commend them. Maybe that’s EXACTLY what we need, VIGILANTE HEROES. Screw the greedy liars and let’s help ourselves by helping the planet. I’m sure Mother Earth is getting right sick and tired of those insane, leeching little parasites called humans mucking up everything….

Over the years, I’ve had the pleasure of a few collaborative projects, of which working with Tom has been by far the longest and most rewarding. Usually creating is a solitary process, where you go away, make something up and return when it’s ready for sharing. Working with someone else, even if you do your bit alone, changes things.

Given what happened with today’s webcomic page, I thought it would be interesting to talk about that particular process as an illustration of how collaborating is different. (If you’ve not been following Personal Demons, a brief synopsis – a small girl called Salamandra is found in a gothic, decaying house by a witch (Annamarie Nightshade) and taken to the local orphanage, where she is unhappy. She runs away and meets another girl, and they get along. A demon is destroyed. Sal is taken back to the orphanage and fids she may have caused a death. Her new ‘friend’ becomes increasingly unpleasant. At this point she and Sal have just had a parting of the ways, and Sal has encountered something scary in the graveyard.)

When I wrote it, the point of today’s scene was just to convey that there is a bigger picture. I hadn’t entirely thought through the character implications, just suggested that someone in the graveyard scares Salamandra and she runs away. Now, this is the girl who has recently run off on her own into the night, and tackled a demon. She doesn’t scare easily. That could have created an inconsistency. Fortunately for me, Tom started from the assumption that what I’d written made sense, and went on to contemplate who, or what exactly in the graveyard would have the wherewithal to scare our young heroine. It won’t be obvious yet, I suspect, but as the plot develops, people will be able to look back and ponder. He’s made it work.

It’s not the first time one of us has thrown a random thing into the story mix, and the other has made sense of it. Usually it’s the other way round because Tom has a knack for coming up with strange and lovely things, and then passing them over to me to see if I can explain them and make them fit. When we started out, Tom had by far a wilder imagination than me, but I’ve always been good at filling in the gaps and creating plausible narratives. I’m happiest when I have his ideas to play with. Tom does write, it’s amazingly dense and full of potential, and looking at it takes me off down huge narrative arcs. We’ve argued about this (very gently) because I can see how everything I write for him stems from his original inspiration, but he finds the process more like my description of today’s comic page, with me taking his vision places he’d never thought of.

The work that emerges from collaboration is very different from anything either of us had done on our own. Not only is there the effect of someone else’s inspiration, but we feed back to each other, and that constant support changes the process too. I can see Tom’s influence in my other work now. I’ve become more confident about my writing, more able to lay down a wild thing and go ‘it’s like this folks’ and let the story unravel from there. I think the process has made him more confident, too.

Collaborating isn’t always this easy and doesn’t always work – as I’ve found on other occasions. It takes a lot of trust, but when you have two people on the same wavelength, wonderful things can be achieved. I’ve just finished editing a Jaime Samms / Sarah Masters collaboration – an excellent piece of work that both authors clearly enjoyed, which also got me thinking about this as a topic. That blending of ideas and perspectives can be so exciting, and a huge opportunity to learn. It’ll be interesting to see if it changes what either of them does independently.

If it’s a way of working you get the opportunity to explore, I do recommend it. For me, it’s been a totally life changing experience.